We have finally zeroed in on this fancy Forex trading school by the name Mentor Tips. This trading school is owned and promoted by an absolute lunatic who is fun to listen to.

He claims to have gone from 7K to $25,000,000 in less than 5 years. Again, this is just empty rambling because no proof has been given till now.

Prior to launching Mentor Tips, this fraud used to run a shady Forex brokerage business registered in Cyprus. This was a fly-by-night brokerage because one day, traders woke up to a broker who mysteriously vanished, never to be seen again. Funds were never returned.

Today, the owner of this company claims that he has ”Forex trading secrets” which he can teach and make you a millionaire overnight.

However, our investigation on this guy reveals a narcissist personality, a serial liar who is also very egotistical. He is just a certified con because what he says and does is the true reflection of a con artist. No doubt about that.

We’ve said that it is a Forex trading school, or at least it masquerades as one.

This website is run by someone called Reza Mokhtarian. His Twitter profile depicts the image of someone who is living life on the first lane.

Reza’s story is an interesting one. He claims that before he founded Mentor Tips, he used to be a pizza delivery guy who spent the night at the back of his car because he had nothing.

You just read it correctly. A guy making $25 million in less than 5 years.

But first, let’s talk about his brokerage business (Capital Trust Markets) which disappeared with depositor funds sometime in 2014.

According to some records whose reliability cannot be verified, Capital Trust Markets was registered in New Zealand.

Then apparently this guy purchased a white label Forex trading software, then started a brokerage company which would then take in client deposits.

This trading platform, in its most basic form, allows the owner to exercise full control over trades that are placed by clients of a brokerage firm. So you can imagine that Reza was simply trading against his clients. The user, on the other hand, would never know that Reza was only using a simulator as opposed to a platform that routes trades to the various exchanges.

Therefore, it appears that Reza of Mentor Tips was simply accepting client deposits and spending it on himself.

This guy has also been exposed several times on sites such as Forex Peace Army and Rip-report. If you do a little bit of searching on the web, you will see that the CEO of Mentor Tips stole from a number of traders.

This guy simply stole money as soon as it was deposited. There are even stories floating around of clients who managed to beat Reza in his own game. When these clients attempted to place a withdrawal request, these were rejected.

This is shocking because even after getting exposed by several traders on the web, the owner of Mentor Tips trading academy is not giving up. He is still in business, full swing.

This is the ultimate testimony that Reza the con stole money from many traders who did business with him through Capital Trust Markets.

At one point, a group of dudes caught up with him in a park somewhere in Brampton, Ontario. They beat the hell out of him at gun point. Reason, he had stolen a lot of money from them… something that Reza would deny later on, claiming that these people were his rival, not victims whom he had stolen money from. Here are some few pictures that show how this guy was dealt with. 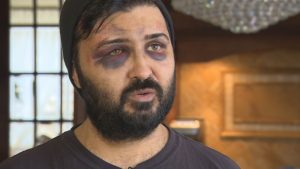 Complaints were coming in thick and first. Reza was risking attention from the Canadian authorities (as you can see in the 3rd picture above). So he quickly shut down the scam brokerage business and started Mentor Tips.

Mentor Tips was launched sometimes in 2015, and now Reza is at it again. He claims that he will teach you ”all Forex trading secrets” for the price of $97 per month.

This guy is of course recommending a Forex broker after you sign up. You already know how it goes. A customer signs up, and they are quickly asked to open a live trading account with the chosen broker so that the secrets which they learn at Mentor Tips can be implemented there.

Up to this point, do you realize that this is a laughable character? After all the bad reputation that surrounds him, he still has the courage to setup another fraudulent business with the intent of stealing money from victims. We are 100% sure that this guy is looking for the next batch of gullible Forex investors.

You may be wondering just how this guy manages to convince so many people.

But remember that Mentor Tips is well-marketed. His target is mainly the elderly, the desperate to make quick money and the naive.

His social media profiles are full of pictures of a young man who owns the world. That is the most important marketing tactic used by the owner of Mentor Tips to scam unsuspecting victims.

Apart from this, Reza also loves to create videos conveying how wealthy he is. These videos often begin with a man driving a Lamborghini or any other expensive car before going into a 15 minutes break where he will use that opportunity to talk about his wealth and how you can be wealthy like him too.

So, what is the secret to making money like Reza? Well, you just have to purchase his Forex trading education at Mentor Tips and open a live account as soon as possible.

This guy has a Facebook page where he used to host his ridiculous videos. We do not know why those videos were removed. But the point is, we watched those videos and were left in a state of bewilderment.

These are just some of the few ridiculous claims that the owner of Mentor Tips makes. It’s now up to you to choose whether or not you will trust him.

All evidence has been presented before you. Mentor Tips is run by a scammer. If you don’t want to lose your money, just pick any of these products instead.